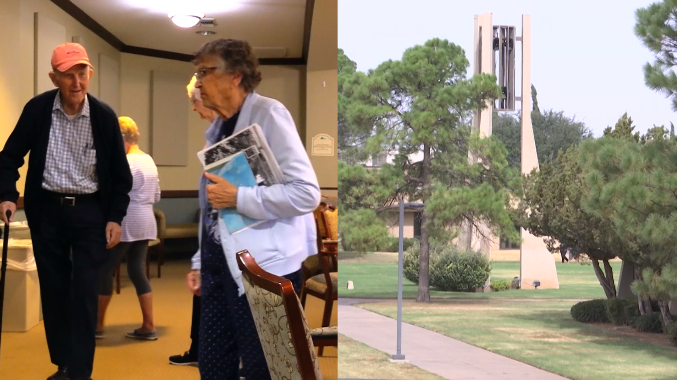 ‘The college experience they never had’: Midland College’s program for students 50+ returns in person

MIDLAND, Texas (Nexstar) – “College Classics” is not your typical student program. But it is perhaps the most interesting program at Midland College.

Classes are specifically tailored to adults over 50.

“It’s a really good program because it gives a lot of these people a chance to come back to college, or maybe get the college experience they never had,” said David Hopkins. , Jr., Henry Professor of History and Chair of the History Department. at Midland College.

“College Classics” began over thirty years ago in the spring of 1989. The program is quite old on campus.

The objective is simple: to teach subjects that interest the inhabitants and on which they want to know more.

“Many of our students are in their sixties and seventies and are retired,” said Brenda Cordero, associate director of
Community programs and continuing education. “They always want to get out of the house and do things.”

Although the courses are not intended for student credit, grades, or a degree, this does not give these “College Classics” students a pass. They are still expected to participate and pay attention, which is not so difficult for these older and perhaps wiser students.

“So everyone brings something unique to the class,” said Midland College Chief of Police Richard McKee.

McKee is also an instructor. His “College Classics” course is called “Current Topics in Law Enforcement”. The course started on Monday.

“It’s a really interesting class because you never know what topics are going to be covered,” McKee said. “We discuss many current events and break down law enforcement events, what laws accompany a particular incident and why the decisions were made.”

Classes like Chief McKee’s take place in an educational setting. But it’s also informal and inexpensive: $25. This allows eligible students access to at least eleven courses this semester under the program. There are course options such as “The Rise and Fall of the Roman Empire”, a course taught by Professor Hopkins.

“These are nice, condensed three- to four-week courses, and they’re very manageable,” Hopkins said. “At least for my classes, there is no homework.”

Professor Hopkins says his students come from a myriad of different backgrounds, such as the oil and service industries – even education. He says there is a defining difference between his “College Classics” students and the so-called “traditional” students: the former have an incredible amount of life experience. In the end, they are eager to reopen the manual.

Although the clear purpose of “College Classics” is to teach and learn, perhaps the biggest part of the curriculum is not the curriculum, but the students.

Terry Gilmour is Professor of Government and Director of the Honors Program at Midland College.

“They’re looking for ways to keep their minds active, to get involved in the news. I teach political geography,” Gilmour said.

Gilmour’s class doesn’t actually meet at Midland College, but near Manor Park, a location voted for by his students and accessible to them. Since starting the Gilmour’s Classics course in 2008, she has traveled to nearly fifty countries with her students. The most recent was Afghanistan. But as ever-changing events across the world in politics and government, so does his agenda. No year is like the next.

Midland College also offers other courses. They include artificial intelligence, the black plague, and something much lighter, like clogging.

“It’s like a tap dance, and the ladies, they love it. They come every time,” Bredna Cordero said.

There is still time to register for classes. For those interested, you can visit the Midland College website here.

Coordinator of the US Chess Sees Correspondence Chess Program