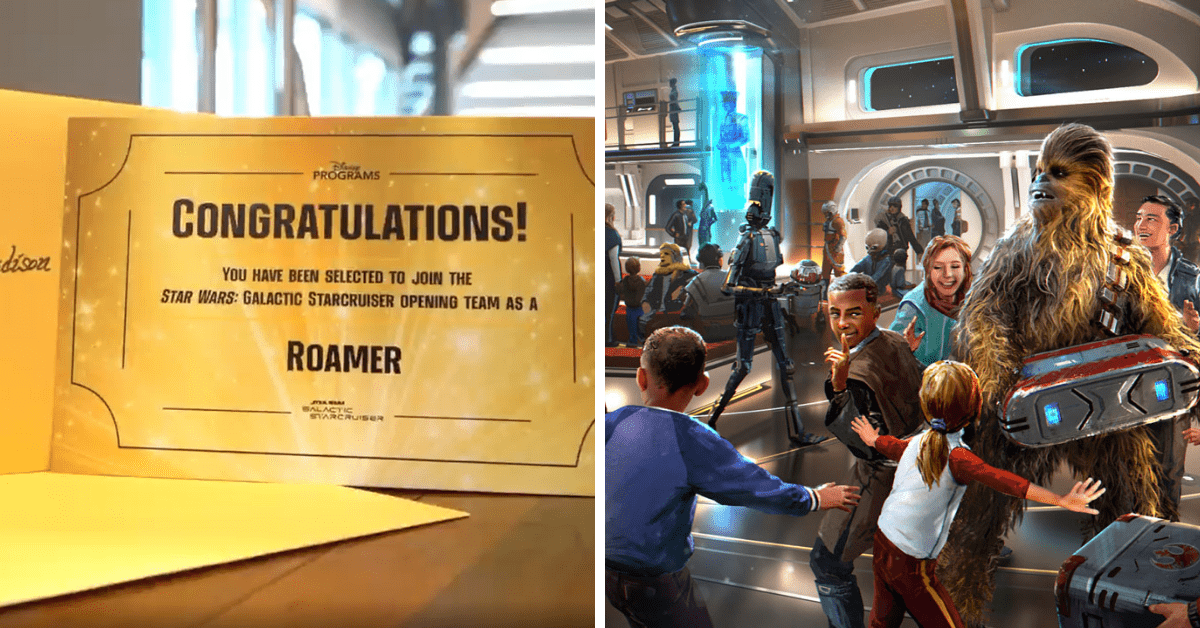 The highly anticipated Galactic Starcruiser will take guests on a two-night (simulated) journey through a galaxy far, far away. On board the Galactic Starcruiser, guests will be fully immersed in the Star wars history, because every decision they make will shape the outcome of their journey.

And now, Disney has surprised a few lucky college program attendees with the news that they will be the crew of the Cruiser Halcyon’s maiden voyage.

Disney Programs released a heartwarming video showing college program attendees surprised by their offer to work aboard the Halcyon when it launched on March 1, 2022:

These are the roles they are looking for…! 💫 Last week, 58 Disney College Program attendees got the surprise of a lifetime when they found out they would be part of the opening crew for Star Wars: Galactic Starcruiser! Watch our video for the big reveal and check out the blog at the link in our bio for more!

You can watch the video on the official Disney Programs blog here.

Disney Programs goes on to explain the application process for these attendees, which led to the big surprise this week:

A few months ago, over a thousand Disney College Program attendees attended briefings on transferring roles and being a part of the opening crew for Star Wars: Galactic Starcruiser. , a revolutionary two-night immersive experience for guests of Walt Disney World® Resort. Of these, hundreds applied and were interviewed for this unique opportunity. After careful consideration, 58 participants were selected to join the opening team.

Last week all 58 were invited to a “networking event” at Flamingo Crossings Village with the Star Wars: Galactic Starcruiser management team. Unbeknownst to them, the event was a surprise announcement and celebration that everyone was accepted to join the team!

Upon arrival, participants received an envelope which they were instructed not to open. The event began with introductory speeches from the management and the Walt Disney World Ambassador team, then, well, look and see…!

Each of the 58 participants received an envelope containing the news that they would be part of the opening team of Star Wars: Galactic star cruiser. The big reveal came with cheers, tears, hugs and even streamers around the room.

Carlos, one of the Disney College Program attendees, said:

“We want to get there. You know? We want to make a difference. And opening that envelope solidified that, man, we made it. And it’s really special.

Many others added that they had become “foggy” and “in tears,” and immediately called their mothers.

Jerome Smith, the general manager aboard the Star wars: Galactic Starcruiser, was there to surprise participants with incredible news. He was recently shown in another video greeting existing Cast Members behind the scenes and giving them the much-anticipated news:

“Tonight was actually a speechless moment for me. See our recognized college program and the real joy that springs from their hearts because of the emotions. I had to get away from all the excitement to sit in a corner and watch it from a distance, so that I could really enjoy the moment too, because moments like this don’t come all the time.

We look forward to hearing more about the journey of these lucky crew members until the Starcruiser opens next March.

Have you booked a stay at the Halcyon for next year? Let us know!